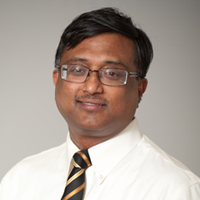 A native of Bangladesh, Dr. Ahsan received his medical degree from Dhaka Medical College and was awarded the Gold Medal in Medicine. He received the prestigious Commonwealth Scholarship and completed a Ph.D. in Clinical Pharmacology/General Medicine at the University of Southampton in the United Kingdom for his research on the ethnic variation of the pharmacokinetics and pharmacodynamics of calcium channel blockers. Dr. Ahsan completed postgraduate training in Internal Medicine and Cardiovascular Disease at the University of Pennsylvania and Drexel University College of Medicine in Philadelphia, and did his Interventional Cardiology Fellowship at the Mount Sinai Medical Center in New York. He is Board Certified in Internal Medicine, Cardiovascular Medicine, Nuclear Cardiology, and Interventional Cardiology. He was awarded the Young Investigators’ Award by the American Society of Nuclear Cardiology in 2001, and American Society of Echocardiography in 2004.

He was Associate Professor and the Director of Cardiac Catheterization Laboratory at the University of California, Irvine Medical Center before joining Nevada Heart & Vascular Center. Dr. Ahsan has recently been appointed as Clinical Professor of Medicine by the University of Nevada School of Medicine (UNSOM), and is currently the Director of Cardiac Catheterization Laboratories and Cardiovascular Research at the University Medical Center (UMC). Dr. Ahsan takes special interest in building Cardiovascular Interventional clinics and research programs in developing countries, and has led teams of U.S. Physicians, Technologists and Nurses to exchange work experiences there.